How To Create a Cover With nopea.media plugin 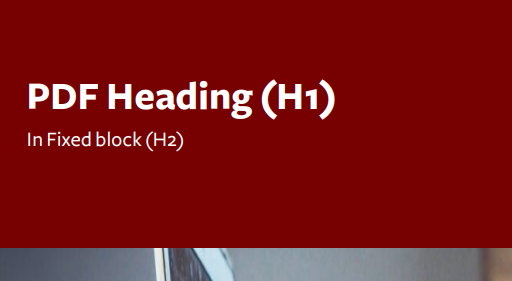 In How to Add a PDF File Into a Nopea.media Publication we explained how you can add a PDF file made with different softwares, such as Affinity Photo or InDesign, to your nopea.media publication.

Now we have developed nopea.media plugin so that you can make your publication’s cover and back pages only using nopea.media. You don’t need separate softwares to make a cover anymore. However, if you want a cover with very specific styles, it’s still possible to add a separate PDF as instructed above.

We created new text editor blocks: “PDF Heading” and “Fixed block” which makes creating cover pages easy. You can utilize the blocks in a following way:

So with PDF Heading and Fixed block you can determine the cover’s fixed areas at the top or bottom of the page, colors and the size of the heading and text. Often there is an image on the cover which you can add as follows:

Tip! You can determine the PDF’s primary and secondary color in the plugin settings. The settings are located in the left sidebar “Publications” -> “Settings” -> “PDF Color Scheme”. The color(s) must be in CMYK format. Primary color determines the color of headings and emphasized text such as bold text. You can choose either the primary or the secondary color to be used for PDF Headings and Fixed blocks.

The padding of Fixed blocks was 20 px and the texts of the lower block were set loosely which meant that the image had less space.

The client wanted the image to be bigger and the font color of the texts as red in white background. Those were easy to fix in Fixed block and PDF Heading settings and by adjusting the image size.

To the latter, final version of the cover page the background color of Fixed blocks were set as white. The color of PDF Headings were set as a secondary color which was determined in nopea.media settings and the color was taken from the image’s red ball (cheek) with pipet.

The padding of Fixed blocks was downsized and the bottom block’s texts adjusted so the image had more space.

Size of the page in publications made with nopea.media is 1306 x 1800 px. Cover image’s background and size were adjusted with free program called Gimp in a way that the canvas page was the required 1306 x 1800 px and so the image settled right sized with other content.

LukSitko magazine’s back cover was also made with nopea.media. First, a full-sized image was added to the page and after that a “PDF Columns” block which contains the texts. The heading of the post is hidden in text-editor’s settings so it is not visible in the back cover.